The second National TY Schools Safety Table Quiz was organised by the Midland branch of National Irish Safety Organisation (NISO) and hosted recently by AIT. The venue was the Nursing and Health Sciences Building.
Eleven teams including Our Lady’s Bower Secondary, Moate Community, Athlone Community School, Mercy Secondary School, Ballymahon and Marist College competed for the trophy and prizes. They were competing for the “John Flanagan” Cup.
The winning team was from Athlone Community College consisting of Adam Cummins, John Feeney and Brian Kelly. The Moate Community School team of Tara Geoghegan, Lauren Lawlor and Ciara Maxwell were runners up followed by two Our Lady’s Bower teams were runners up team in third and fourth place.
The winning team members each received an electronic tablet, a €100 cheque and a trophy, along with a trophy for the school. The runners up team members each received a €50 cheque, a sports voucher and a trophy along with a trophy for the school. 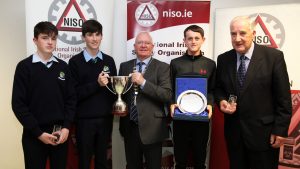