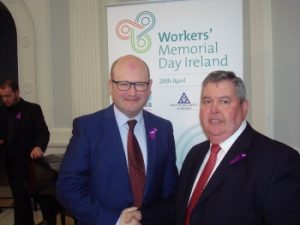 The Government, Irish Congress of Trade Unions (ICTU), Ibec and the Health and Safety Authority (HSA) today joined together for what was the first joint national event to mark Workers Memorial Day Ireland.
This commemorative event is to remember people killed, injured or made ill and persons bereaved through work-related activities.
In a five year period from 2010 to 2014, 253 persons were killed in work-related accidents in Ireland and many thousands were injured or suffered ill health. On average, one person a week died in work-related accidents in Ireland in 2014; 56 deaths in total, including five children.

Patricia stated that there were 30 deaths in agriculture, 8 in construction and 3 in manufacturing during 2014 with 7,431 recorded accidents. In recognition of the new “training tool” for Safety Representatives, a 280-page manual, launched this morning, she stated that “no job is worth someone’s life” and that “health and safety is non negotiable”. She called on workers to co-operate with employers and government to prevent a repeat of the fatalities experienced in 2014.

Danny congratulated the HSA on their continued good work with reduced funding and urged the Government to “invest in the HSA” to protect the valuable work that they do.

Martin stated that “most employers are aware that they must protect their workers from physical harm but less aware of their duty to protect their wellbeing”. He stated that 1,400 workers have been killed over the last 25 years and while the figure has halved, 56 were killed in 2014 and 10 to date in 2015. On the positive side, O’Halloran states that 750 persons are alive today as a result of regulatory intervention. He stated that with current GDP figures, the cost of accidents to the Irish economy is EUR2.8 billion. He highlighted the seriousness of the situation by comparing the 1.8 million days lost in 2011 with the latest figures showing 8,500 days lost through strikes in 2012. Martin added that an increase in economic growth may lead to an increase in accidents and that prevention is the key to halting this.

The HSA CEO also stated that a study by ESRI/Trinity College showed that there was a direct correlation between the level of inspections, HSA staffing and the level of accidents. He finished by stating that “the future depends on what you do today”.

About the Safety Representative Resource Book

The Safety Representative Resource Book was launched by the Minister for Business and Employment, Ged Nash, this morning, 28 April 2015. It is a new book that provides all the information needed for a safety representative to carry out his or her role as effectively as possible.

The book is divided into eight sections with a total of 43 chapters over 278 pages. Topics covered include the role of the enforcers, consultation and the rights of safety representatives and the role of safety committees; the role of the employer and professionals; the hazards in the workplace with 17 chapters on the biggest hazards; a section on vulnerable workers is included and finally health and safety issues in eight different workplace sectors are highlighted. These include Construction, Education, Healthcare, Wholesale/Retail, Manufacturing/Mines/quarries/Utilities, Agriculture, Hospitality and Others.

To complement the new publication, NISO is running a series of Safety Representation seminars which will highlight the content and usefulness of the guide.

Click here for further information on these seminars and provisional dates.

Click here to reserve your place on a seminar.

Details of speakers to be announced shortly.