Posted at 15:07h in Safety News by tokeeffe

Last week Wicklow County Council asked a court to consider the cuts to its annual budget when imposing punishment and following a hearing Judge Desmond Hogan said he needed time to consider the matter. 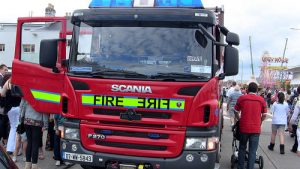 Last month the council pleaded guilty in the middle of its trial at Dublin Circuit Criminal Court to three charges of health and safety breaches after the State dropped a charge alleging that one of these breaches had caused the deaths of the two men.
Last Tuesday, Aileen Donnelly SC, defending the local authority, said that because this charge had been dropped the court should approach the sentencing as if the deaths did not occur.
A representative from the council pleaded guilty to failing to ensure the safety of employees by ensuring there were enough fire engines available and that there was an adequate central command system to call up fire crews from other stations.
The council also admitted failing to review an outdated safety statement and failing to provide adequate training in a new air foam system. A charge of failing to carry out a proper risk assessment was withdrawn by the prosecution following the pleas.
Ms. Donnelly asked the court to accept that these were not deliberate breaches and that the council regretted them and had remedied them since the fatal fire.
She said that as a public authority Wicklow County Council has a duty to provide services to the county and that since 2008 their budget has been reduced by 29 per cent. She said that Wicklow had the smallest budget of all the local authorities in the greater Dublin area.
She said that the maximum sentence under health and safety law is a fine of €3 million but she said this fine is there for major multi-national companies as a deterrence. Counsel said the fine was not there to put people out of business and that the council should not be penalised to the point that it could not pay.
Source: Wicklow People