Posted at 14:46h in News, Safety News by gbrady 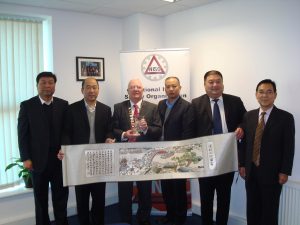 Mr. Galvin gave a presentation in which he outlined NISO’s operations, functions and role in raising occupational health and safety awareness and standards in Ireland.
Mr. Hao Jinghong, deputy director, Henan Provincial Administration of Work Safety, was interested to learn more about the relationship between NISO as the voluntary body and the Health and Safety Authority as the governing body. Mr. Galvin explained that NISO and the HSA work closely together and that while the HSA enforces health and safety legislation, NISO provides information about legislation but has no powers/authority to enforce.
The role of NISO as a membership organisation was also queried by Mr. Jinghong who asked “Are the members investors in NISO?” and “Is membership of NISO compulsory?”. Mr Galvin  explained that organisations that join NISO do so by choice and that they become members of NISO, enabling them enjoy membership benefits, but they are not investors.
Mr. Niu Yuedao, director general, Changyuan County Administration of Work Safety, inquired as to whether any third party or government body supervise NISO. Mr. O’Keeffe explained that NISO provides an annual report following the national AGM to the Companies Office and that NISO is governed by the same legislation that governs all companies and also the Charities Regulator.
Finishing up the question and answer session, Mr. Jinghong asked about the measures that are in place to govern and support health and safety in SMEs. Mr. Galvin explained that the HSA can inspect companies of all sizes and provide recommendations for improvement or give prohibition notice if previous recommendations have not been met. The HSA website and the free online BeSMART tool were also noted as valuable resources for SMEs and non NISO members.
At the close of the meeting, Harry Galvin presented the Henan Delegation with a piece of Dublin Crystal and in return, Mr. Galvin, Mr. O’Keeffe and Mr. Azong were presented with traditional Chinese tapestry wall hangings.