Posted at 15:31h in Niso News, Safety News by gbrady

National Irish Safety Organisation supports Carbon Monoxide Awareness Week September 26th – October 2nd
NISO is once again proud to support Carbon Monoxide Awareness Week which takes place this year between 26th September and 2nd October. As in previous years, the aim of the campaign this year is to highlight the fact that carbon monoxide (CO) can, and does, kill.  It’s colourless, odourless, hard to detect and it can kill in less than three minutes.  On average, six people in Ireland die every year as a result of unintentional carbon monoxide poisoning.  But there’s a lot you can do to safeguard against it.
Remember:
·         Carbon Monoxide can be produced by ANY fuel that burns, including coal, turf, oil, gas and wood.
·         Service fuel burning appliances and have chimneys swept annually.
·         Install an audible carbon monoxide alarm in your home.
Carbon monoxide poisoning can also occur in industrial and commercial settings.  Employers should be aware that any fuel that they burn can produce carbon monoxide and should ensure that appliances are installed, regularly serviced, maintained and operated by competent people.
The campaign is being fronted by Tommy McAnairey, the ballad-singing canary created to drive awareness about carbon monoxide, and will feature across all national and local media with a significant social media presence.  There will also be multiple radio and TV sponsorships as well as media interviews with people directly affected by carbon monoxide.  Rory Cowan, star of the hit comedy Mrs Brown’s Boys, is a campaign ambassador for Carbon Monoxide Awareness Week this year due to his own personal experience with carbon monoxide exposure.
As a NISO member, if your organisation would like posters and information leaflets for display/ hand out amongst staff in the workplace, please contact Gas Networks Ireland on 1850 200 694 or email networksinfo@gasnetworks.ie advising the quantity and postal address and they will send them out to you.
You can also help personally by following Tommy on Twitter @TommyMcAnairey from 19th September. 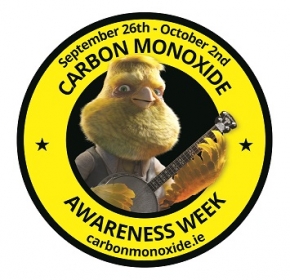